Rodney Reed with his brother Rodrick, nephew Rodrick Jr., and mother Sandra Reed at the Allan B. Polunsky Unit, West Livingston, Texas in 2019. Photo courtesy of the Reed Justice Initiative.

We just got the news that the Texas Court of Criminal Appeals has granted Rodney Reed an indefinite stay of execution, meaning he no longer has an execution date. This news came just hours after the Texas Board of Pardons and Paroles unanimously recommended a reprieve of Rodney’s execution.

We are extremely relieved and thankful that the Texas Court of Criminal Appeals (CCA) has issued a stay of execution for our client Rodney Reed. The CCA has ordered the claims of Brady violations, false testimony and actual innocence in Mr. Reed’s case back to the trial court. This opportunity will allow for proper consideration of the powerful and mounting new evidence of Mr. Reed’s innocence.

Read the decisions here and here.

Here’s how you can take action next.

1. Share this news on social media: BREAKING NEWS: Texas Court of Criminal Appeals has granted @innocence client #RodneyReed an indefinite stay of execution, meaning he no longer has an execution date! Thank you to all who called, tweeted and spoke out against the execution of an innocent person: https://bit.ly/33SqaKW

2. Add your name to stay involved in Rodney’s case.

3. Support Rodney’s family. Rodney Reed’s family will continue to need resources to advocate for his innocence. Donate here to help them in their fight.

Thank you to all who called, tweeted, and spoke out against the execution of an innocent person. Today, we rejoice. Tomorrow, we keep working to prove #RodneyReed‘s innocence. Stay involved. https://t.co/X0UIaZZzZ3 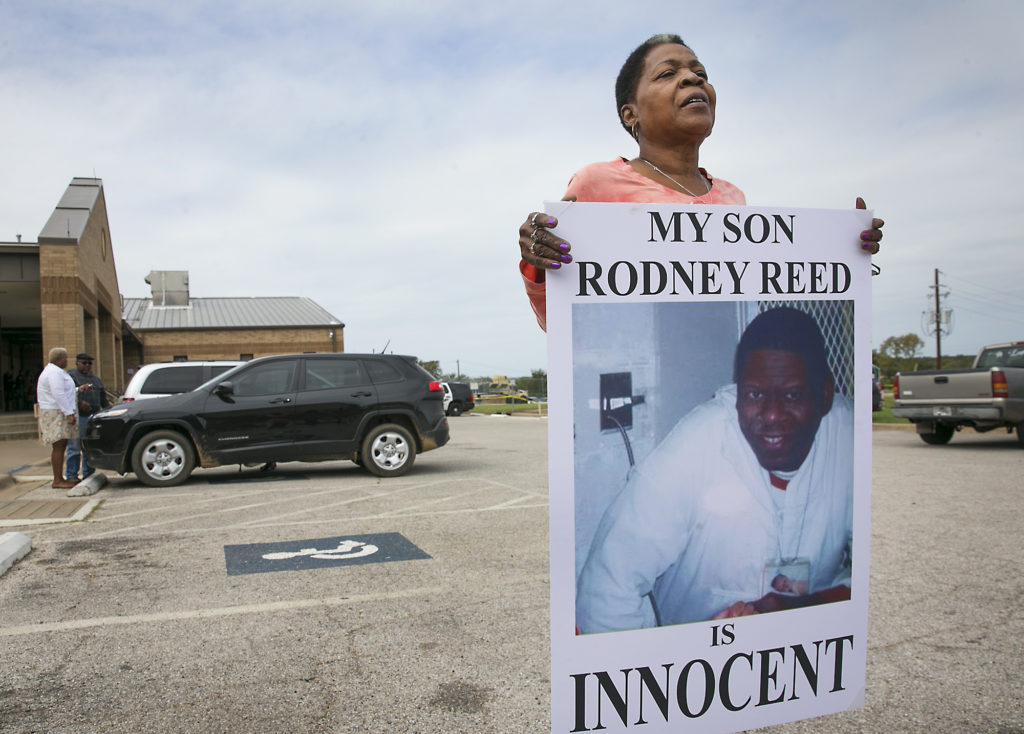 Sandra Reed, the mother of death row inmate Rodney Reed, shows her continued support of her son by carrying this placard around the parking lot during a break in a hearing in Bastrop County District Court on Tuesday, October 10. 2017. Reed was asking Judge Doug Shaver to reconsider testimony from his murder trial in the slaying of Stacey Stites. (Ralph Barrera/Austin American-Statesman via AP)