Q&A with Daniel Medwed, Editor of Textbook on DNA Exonerations

In March, Cambridge Press published Wrongful Convictions and the DNA Revolution: Twenty-Five Years of Freeing the Innocent, a textbook that examines the lessons learned from 25 years of DNA exonerations, featuring articles from leaders of the innocence movement and a foreword by Innocence Project Co-Founders Barry Scheck and Peter Neufeld. 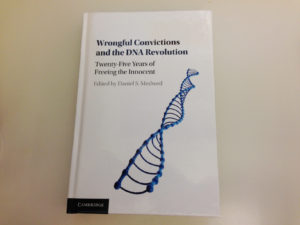 We sat down with editor Daniel Medwed, professor of law at Northeastern University, to discuss the volume, the publishing process and his hopes for he future of the innocence movement.

Innocence Project (IP): How did you first become interested in innocence work?

Daniel Medwed (DM): I cut my teeth as a young lawyer in the Criminal Appeals Bureau of the Legal Aid Society of New York City in the late 1990s. In that role, I focused principally on researching and writing about the legal errors in my clients’ cases. I soon became fascinated not only with the concept of legal error, but also with factual error. This fascination grew as I learned about the groundbreaking work of the Innocence Project a few miles away at Cardozo.

When I transitioned into academia, I joined forces with a senior colleague at Brooklyn Law School in 2001 to establish the Second Look Program, a clinic that investigated and litigated claims of innocence by New York prisoners whose cases lacked evidence suitable for DNA testing. I’ve maintained an interest in the field ever since, even as I shifted away from clinical work and into a more traditional research-oriented position. In short, my experience in appellate and post-conviction work led to my passion for innocence advocacy, which in turn spawned a scholarly devotion to the topic.

IP: What prompted you to put together this volume?

DM: I can be a bit sentimental and nostalgic—just ask my wife!—and as we approached the silver anniversary of the Gary Dotson and David Vasquez exonerations in 2014, I began to reflect on the status of the innocence movement. What have we learned from a quarter century of DNA exonerations and what do we still need to know?

IP: Who is this book intended for?

DM: I would like to say that it’s intended for anyone and everyone interested in criminal justice. But there are too many footnotes! Frankly, it’s designed for criminal justice practitioners, judges, legislators and academics who are passionate about criminal justice policy and committed to the idea of making our system more accurate.

IP: What are your hopes for the future of the criminal justice system over the next 25 years?

DM: I dream about a criminal justice system that is both more accurate (fewer innocents between bars) and more fair (better representation for the poor and the eradication of racial discrepancies at all stages of the process). I think it’s possible to achieve this. Accuracy and fairness are politically attractive, bipartisan concepts, not to mention cost-effective in terms of diminishing the expense of needless incarceration.

I also hope the Innocence Movement continues to evolve and adapt. And another thing on my wish list: that Barry and Peter never retire!

Purchase Wrongful Convictions and the DNA Revolution: Twenty-Five Years of Freeing the Innocent in hardcover or eBook here!