John Kunco speaks to press after his release from prison on May 23. Photo by Jeff Swensen.

(Pittsburgh, PA – May 23, 2018) Today, a court in Westmoreland County, Pennsylvania vacated the 1991 rape conviction of John Kunco based on new DNA evidence proving his innocence. In addition to the DNA evidence, attorneys also discovered evidence showing that Kunco had a corroborated alibi showing his whereabouts at the exact time of the crime. After wrongly serving 28 years, Kunco was released on $10,000 unsecured bond around 7:40 p.m. ET from Westmoreland County Prison. The case was adjourned for 90 days for the district attorney to decide how to proceed with the case.

Check out pictures from the emotional day

Watch Kunco walk out of prison:

Kunco’s conviction was obtained primarily through the introduction of bite mark evidence, a discredited technique that the Innocence Project has long advocated should be abandoned entirely. Indeed, this case is the 31st wrongful conviction or indictment involving the use of erroneous bite mark evidence.

“We are grateful to the court for vacating Mr. Kunco’s conviction and restoring his freedom,” said Karen Thompson, a senior staff attorney with the Innocence Project, which is affiliated with Cardozo Law School. “Now that there is irrefutable DNA evidence proving Mr. Kunco’s innocence, we hope the district attorney will move quickly to dismiss the indictment.”

“There is irrefutable DNA evidence proving Mr. Kunco’s innocence, we hope the district attorney will move quickly to dismiss the indictment.”

At approximately 5 a.m. on December 16, 1990, a woman who was blind in one eye and farsighted in the other awoke to find a man in her bedroom.  Over the next six hours, she was brutally raped and tortured by the assailant.

Kunco, who has a slight speech impediment, was originally identified as the perpetrator in a highly unusual and unreliable manner. Two days after the attack, Police Officer William Dlubak, without ever having heard Kunco’s voice, did a voice impression of him to the victim, who then came to believe that Kunco was her assailant. Kunco was the building superintendent in the apartment where the victim lived, but he had only spoken to her on one prior occasion.

At trial, the prosecution relied on the critical testimony of two forensic dentists, Dr. Michael Sobel and Dr. Thomas David, who both claimed that “to a reasonable degree of dental certainty” Kunco’s teeth matched a mark on the victim’s shoulder, despite only “seeing” the mark for the first time five months after it was created. In closing arguments, the district attorney argued, “There’s no way, no way on this earth, for Mr. Kunco to explain how his tooth marks got on Donna Seaman’s shoulder unless you accept the fact that he’s the one who attacked and brutalized Mrs. Seaman.  That’s the only explanation, ladies and gentlemen.” Kunco was convicted and sentenced to 40-90 years.

Despite this DNA evidence, the court refused to vacate the conviction, ruling that the bite mark evidence was so strong that the jury would not change its verdict.

Kunco, who has always maintained his innocence, contacted the Innocence Project. In 2009, lawyers secured DNA testing of an electric cord from a bedroom lamp that the assailant used in the attack. That testing identified male DNA that excluded Kunco. Despite this DNA evidence, the court refused to vacate the conviction, ruling that the bite mark evidence was so strong that the jury would not change its verdict.

In the years since that original testing, bite mark evidence has been widely discredited. The National Academy of Sciences and President Obama’s Council of Advisors on Science and Technology condemned the discipline as having no scientific basis. Following a six-month investigation into the technique, the Texas Forensic Science Commission recommended a complete moratorium on the use of bite mark evidence and is currently conducting an audit of all bite mark convictions in Texas, since any such conviction is inherently unreliable.

Based on the discrediting of bite mark evidence since the time of Kunco’s conviction, the Innocence Project filed a new motion to vacate the conviction. The Innocence Project also learned that a blanket on which the attack occurred was still available for DNA testing and asked the court to grant testing of the blanket. The court conducted a hearing in March 2016. Evidence was presented at the hearing that Drs. David and Sobel had recanted their testimony because the “scientific knowledge and understanding on which [their] conclusions were based . . . has changed significantly since they were given in 1991”.  Thus, the dentists admitted that they “would not” and “could not” testify as to the identity of the probable biter because to do so would be inconsistent “with current scientific understanding” of bite mark evidence.  After the hearing, the court reserved ruling on the motion to vacate and granted testing of the blanket.

“There have now been at least 31 people wrongly convicted or indicted based on erroneous bite mark evidence, yet courts continue to let prosecutors proffer this unreliable evidence.”

The Commonwealth appealed the court’s decision granting testing, arguing that the additional testing wouldn’t undermine the bite mark evidence, identification of the imitated voice and purported commentary by Kunco. The appellate court rejected the Commonwealth’s appeal, noting that the “now discredited bite mark evidence” proffered by the Commonwealth was “problematic, if not entirely incredible.”  The DNA testing subsequently identified a single source unknown male profile from blood on the blanket that excluded Kunco and was consistent with the male DNA on the lamp cord used by the assailant in the attack.

“There have now been at least 31 people wrongly convicted or indicted based on erroneous bite mark evidence, yet courts continue to let prosecutors proffer this unreliable evidence,” said Chris Fabricant, Director of Strategic Litigation for the Innocence Project. Dana Delger, a staff attorney with the strategic litigation department added, “The gross injustice to Mr. Kunco underscores the need for the courts to acknowledge that bite mark evidence is not backed by science and shouldn’t be used in criminal investigations and trials.” 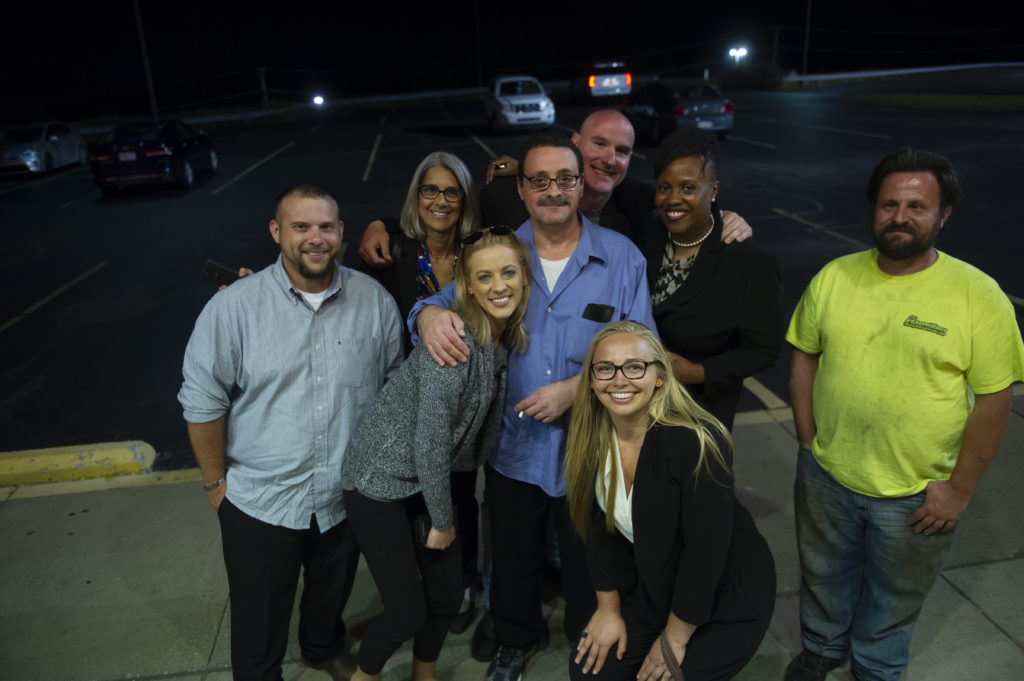 John Kunco with his family and legal team after release on May 23, 2018. Photo by Jeff Swensen.

In addition to the DNA evidence, attorneys for Kunco also discovered new evidence proving that Kunco couldn’t have committed the crime because he was on the phone with the building landlord during the time the crime occurred.  In 1996, five years after the trial, the landlord, in unrelated litigation, gave deposition testimony stating that he had received a call from Kunco on December 16, 1990 at 11:15 a.m. and had written the date, time and a notation that Kunco had called on his lease at the time of the call. The attack didn’t end until 11:45 a.m.