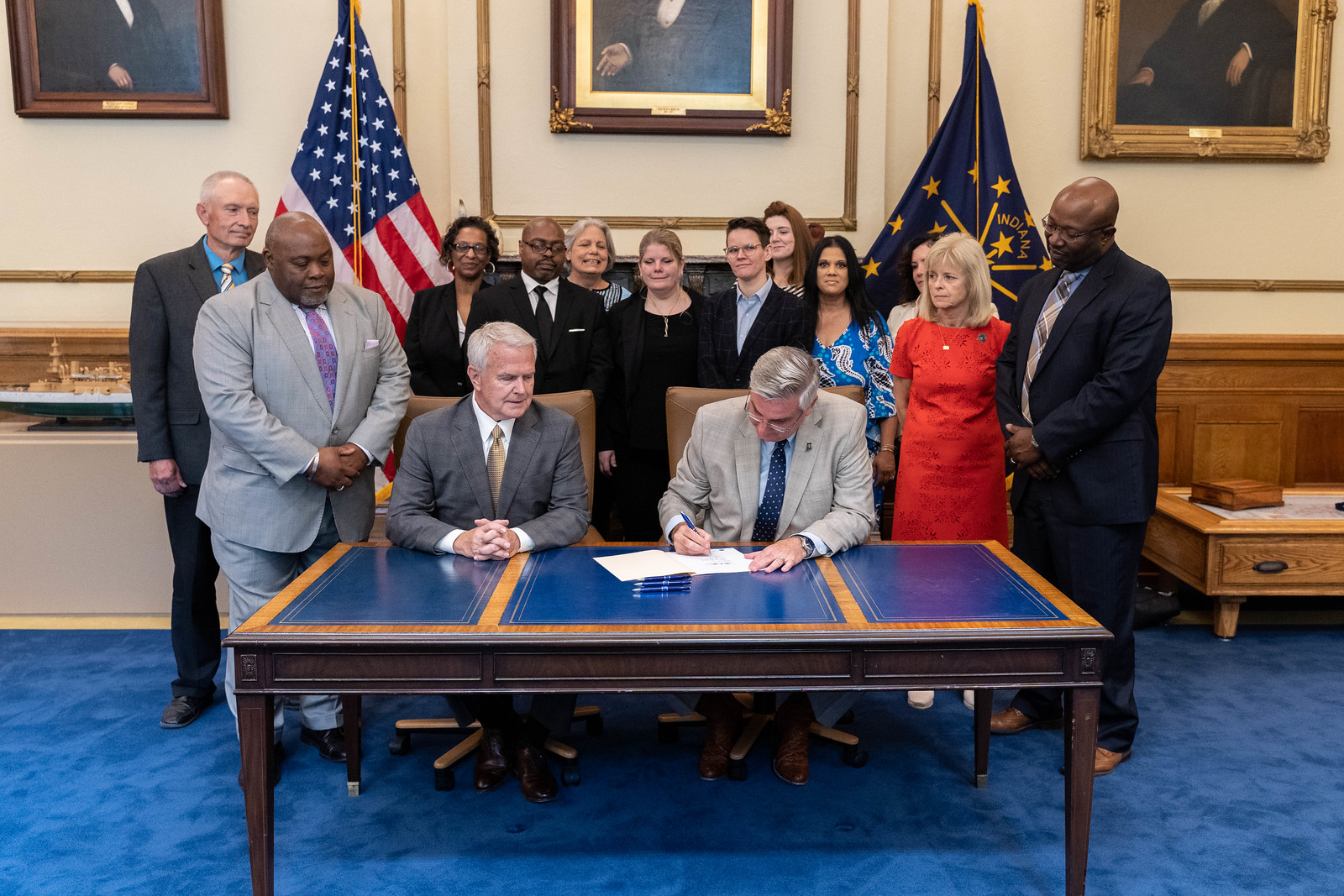 Governor signs bill making Indiana one of 35 states with law to compensate the wrongfully convicted.

(Indianapolis, IN – June 24, 2019) Today, Governor Holcomb participated in a ceremonial signing of legislation to provide compensation for innocent people who were exonerated of crimes they did not commit (HB 1150).

The Governor was joined at the ceremony by Kristine Bunch and Roosevelt Glenn who jointly spent 34 years in state prisons before they were exonerated, and representatives of the Innocence Project and the Indiana University McKinney School of Law Wrongful Conviction Clinic. Indiana became the 34th state to enact an exoneree compensation law earlier this spring.

“We want to thank Representative Greg Steuerwald, Senator Michael Young and Governor Eric Holcomb for their efforts in passing this crucial compensation legislation,” said Elizabeth Powers, state policy advocate at the Innocence Project which is affiliated with the Benjamin N. Cardozo School of Law. “This new law corrects an injustice that leaves exonerees on their own with no assistance from the state that took so much from them, once they are released.”

The new law provides eligible exonerees $50,000 in compensation for every year they were wrongfully incarcerated. Exonerees will also have access to services offered by the state, aimed at reintegration for incarcerated people. “I appreciate the sincere efforts of the legislators who championed this bill that seeks to redress years spent behind bars despite actual innocence,” said Fran Watson of the Indiana University McKinney School of Law Wrongful Conviction Clinic.  “The intent is that compensation will bring some sense of justice and a greater ability to move forward to those impacted by the wrong.”

In addition to losing freedom and precious time with family and friends, exonerees are also deprived of important economic opportunities. Wrongful convictions prevent them from building professional careers, obtaining assets and saving for retirement.

Roosevelt Glenn was wrongfully convicted of rape in Gary, Indiana, lost 17 years of his life in prison and spent eight years on the sex offender registry for a crime he did not commit.  “I’m grateful that Indiana has taken this step to recognize the innocent people in this state who have lost so much to wrongful convictions,” he said. “There’s no way to pay back the years that we missed behind bars but providing compensation will help many of Indiana’s innocent get back on their feet after surviving terrible injustice. This law will provide support to those exonerated in the future as well as many innocent people previously freed and still struggling to make up for lost time.”

Kristine Bunch, an Indianapolis resident, was wrongfully convicted of arson that led to the death of her young son and spent 17 years in prison before being proven innocent. She was released without any support, forcing her to rely on her family until she was able to provide for herself. Despite having earned two undergraduate degrees while in prison, she lacked housing, employment experience, and a driver’s license – all challenges to attaining financial stability.

“When I returned home after losing 17 years for a crime I didn’t commit, I had to rebuild my life with no support from the state that stole those years,” said Bunch. “While no amount of money can make up for lost time, this legislation will provide critical financial support to the wrongly convicted. I’m grateful to the General Assembly and Governor for recognizing the harm of wrongful convictions and passing this important law”