Ginny and Alex LeFever in the prison visiting room at the Ohio Reformatory for Women shortly after she was convicted.

In 1990, Ginny LeFever was wrongfully convicted of killing her husband. At the time, LeFever had four children. She has only maintained a relationship with her youngest son, Alex LeFever, who is now 34. For Mother’s Day, the Innocence Blog asked LeFever to discuss what motherhood was like before, during and after she was wrongly convicted, and how her relationships with her children were affected. This is what she said:

My children were 20, nine, eight and four when I was arrested. When I went to prison, I was cut-off from them. My oldest daughter visited me once every three or four months, and then it got to be less. When she got married and moved out of state, it really got to be less. One at a time, my children stopped coming to see me.

Once in a while, I received school pictures with a card that each of the kids signed with their first name. There was no other contact between us. I tried various ways to communicate with them, but I couldn’t get through to them. It was very hard.

When my youngest son Alex’s foster mother died, his foster mother’s daughter decided to take him in. She thought her mother had made a big mistake not encouraging a relationship between Alex and me. We agreed that, if I allowed her to foster Alex, she would let me have contact with him. That’s how Alex and I started to communicate. It was hard starting to be a mom all over again; he was not the four year old I left when I went to prison, but a wonderful young man.

After I was released from prison, I met Alex and his wife, Stephanie, for the first time at the Texas Steakhouse. I didn’t realize he was married; of course, in my mind, he was still my little boy! I can’t even put into words how it felt to see Alex all grown up—married with two children. Having William and Anetta, Alex’s children, is sort of like having young Alex back. When I was wrongly convicted, I left a four year old; but when I came home, Alex had a four year old.

I don’t have a relationship with my other children. They still have a lot of anger towards me, and I don’t know if we’ll ever move past it. I have hope, though.

Alex—to me—is like the sun, the moon and the stars. He’s an amazing husband and father. I’d like to be able to claim credit for some of that, but all I did was birth him and keep him comfortable for the first four years of his life. Then he was on his own. The person he has become is because of his own hard work—not because of anything I did or did not do. I mourn for the child I lost, but in exchange I got a brilliant young man and I’m very proud of him. 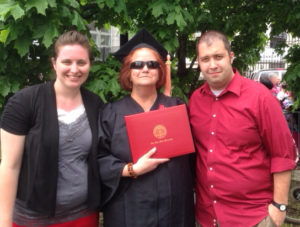 Stephanie, Ginny and Alex at Ginny’s graduation from nursing school.

After speaking with LeFever, we asked her son, Alex, to tell us about the effects that his mother’s wrongful conviction had on his life. This is what he said:

I was four when my mom was arrested. We had a mother-son relationship, but we didn’t have that friendship that builds as years go by. She was my provider and caretaker; I didn’t know her as a person.

I grew up knowing my mom in prison. My siblings stopped wanting to visit her shortly after she was wrongly incarcerated. I followed suit when I was 10-years-old. I didn’t visit her again until I was 16-years-old. She would sometimes send me packages on Christmas, but that was the extent of our communication.

I grew up believing the stories of everyone around me, including those of my siblings—that my mother was a terrible person and she murdered my father. I remember thinking, “If my mom really loved me, why would she do what she did? Why would she kill my father? Why would she want me placed in foster care?”

I went to foster care when I was five. In my foster home, there were ten kids. While I was there, I witnessed at least 3 suicide attempts. Drug use was rampant.

When I was a teenager, I experienced anger, anxiety, depression and Post Traumatic Stress Disorder. I self-medicated with drugs and alcohol. I was arrested at 15 for selling drugs and ended up with a felony. I did not have anyone to guide me through my teenage years.

Eventually, I got married and had kids. When there was trouble in the home, I did not have anyone to confide in. I didn’t have a mother to instruct me on how to raise kids or how to operate as a husband. I was on my own to figure it out. Had I not quit drinking and doing drugs, I probably would’ve been dead before I was 26.

My siblings still believe in our mother’s guilt, and they still harbor a lot of hurt and anger towards her. They think she was released on a mere technicality. They haven’t looked at the facts and probably don’t care to do so. When you become a victim for so long, it becomes difficult to shift that mentality.

My mother was released right before Thanksgiving in 2010. We first made telephone contact on Christmas Eve. She apologized for the years she was in prison and for taking so long to be released. I apologized for turning my back on her and leaving her on her own. We decided that we were going to let the last 22 years go and restart our relationship. It’s been a process, but I remain dedicated to making our relationship the best it can be. 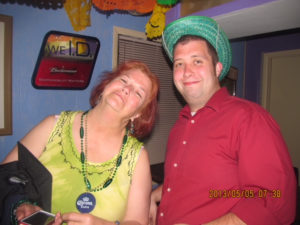 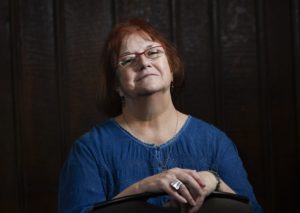 Ginny at the 2018 Innocence Network Conference. Photo by Lacy Atkins.