There was a mix of sadness, relief and confusion in the courtroom as Angela Garcia pleaded guilty to starting the fire that killed her two young daughters, 2-year-old Nijah and 3-year-Nyeemah. After nearly 20 years of fighting to prove her innocence, Garcia, who was 24 when she went to prison, accepted a plea deal that required she admit to arson and involuntary manslaughter in exchange for a reduced sentence, in order to finally have her freedom. 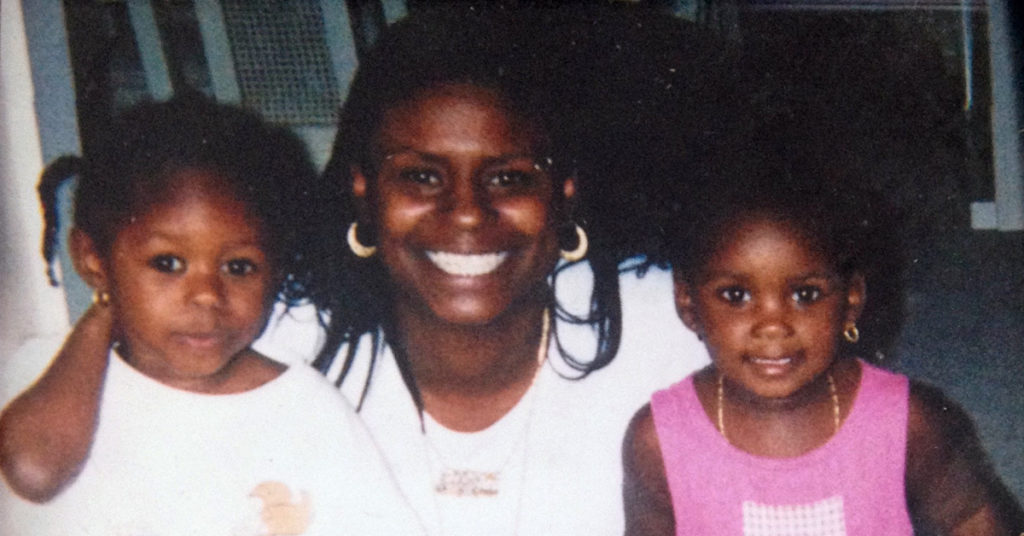 Angela Garcia with her two daughters in 1998.

On the evening of Saturday, November 20, 1999, a fire broke out inside of Garcia’s East Cleveland home. Despite rescue efforts, both of her daughters died of smoke inhalation. After reviewing the scene and sweeping the grounds with an accelerant-sniffing dog (that did not detect any flammable liquids), investigators concluded that the fire was likely a tragic accident caused by an unattended burning candle in the dining room.

A month later, the cause of the fire was changed from “accidental” to “incendiary” after investigators reviewed Garcia’s insurance claim and concluded that she had overvalued the contents of her home. In February 2000, Garcia was indicted on charges of aggravated murder, manslaughter and insurance fraud.

Ohio prosecutors tried to convict Garcia three times, initially seeking the death penalty. The first two trials ended in mistrials after the juries were unable to unanimously decide whether Garcia had intentionally set the fire, though the first jury found her guilty of insurance fraud. During the third trial, prosecutors called more than 50 witnesses, many of whom had not testified in the earlier trials, including an FBI crime scene expert and forensic auditor, and presented new evidence they said showed that a second fire was started on the staircase to the second floor.

After 12 hours of deliberations over two days, the third jury found Garcia guilty of all charges: four counts of aggravated murder, two counts of murder and three counts of arson. In May 2001, Garcia was sentenced to two life terms in prison. She would be eligible for parole after 49 1/2 years. She would be 72 years old. Garcia was also ordered to pay a $60,000 fine.

Garcia and her family members, along with her attorneys, maintained that she was innocent throughout her three trials. After nearly a decade in prison, the Ohio Public Defender’s Wrongful Conviction Project took on Garcia’s case. In 2015, she won a rare evidentiary hearing, with her attorney Assistant Ohio Public Defender Joanna Sanchez arguing that Garcia was entitled to a new trial due to advances in fire and arson science.

Sanchez argued that the testimony of the prosecution’s expert witnesses relied on outdated and widely debunked theories that would be inadmissible in a courtroom today. Specifically, in the third trial, prosecutors introduced photographs—that they claimed to have found just prior to the beginning of the third trial—that had not been developed. The two new witnesses testified, based on the newly-discovered photographs, that the fire started at two distinct locations, the dining room and staircase leading to the second floor. Fire investigators described “puddle patterns,” which they said could be used to determine that an accelerant was used to exacerbate the fire. The “puddle pattern” theory has been widely disproven since the 1999 fire, with fire investigation guidelines now stating that puddle patterns are not a reliable indicator of the presence of an accelerant. According to a renowned fire expert who reviewed the investigation and testimony in Garcia’s case, the conclusions reached by fire investigators were outdated and lacked scientific validity.

On May 9, 2016, after nearly two decades of fighting to prove her innocence, Garcia accepted a plea deal requiring that she admit to setting the fire, upholding the aggravated arson conviction while reducing the aggravated murder charges to involuntary manslaughter.

The deal came on the morning a judge was set to consider whether Garcia would get a fourth trial. Rather than gamble on the possibility of a new trial—which, if granted, still carried the risk of another guilty verdict and potential life sentence—Garcia could be released from prison in six years. Under the plea agreement, her sentence was reduced to 22 years in prison, 17 of which she had already served.

“Surely the prosecutor’s office knew that for Garcia, who had been tried three times, already spent more than 15 years in prison, and was looking at a minimum of 27 more years before she could possibly be released, the deal was too good to pass up,” Sanchez said. “By offering the plea, they prevented it from becoming public that the fire investigation unit had employed unscientific methodology in arson cases for years and that the prosecutor’s office had wrongfully convicted a woman of murdering her two children.”