Frederick Clay at the 2018 March for Justice in Memphis, TN. Photo by Kristen Gondim.

The New England Center for Investigative Reporting (NECIR) and WGBH co-published a four-part series for radio by Chris Burrell about Massachusetts exoneree Frederick Clay, who spent 38 years in prison for a crime he did not commit. In 1981, at only 16-years-old, Clay was arrested, charged as an adult and convicted of first-degree murder. In August 2017, a Suffolk Superior Court judge exonerated Clay based on new evidence that revealed he had been misidentified.

The four-part series largely focuses on Clay’s life post-exoneration, which has been met with many challenges. Without any support from the state, Clay has struggled with emotional trauma and finding a good-paying job and affordable housing. As Burrell writes, Clay’s newly-won freedom has become “a struggle for basic survival.” 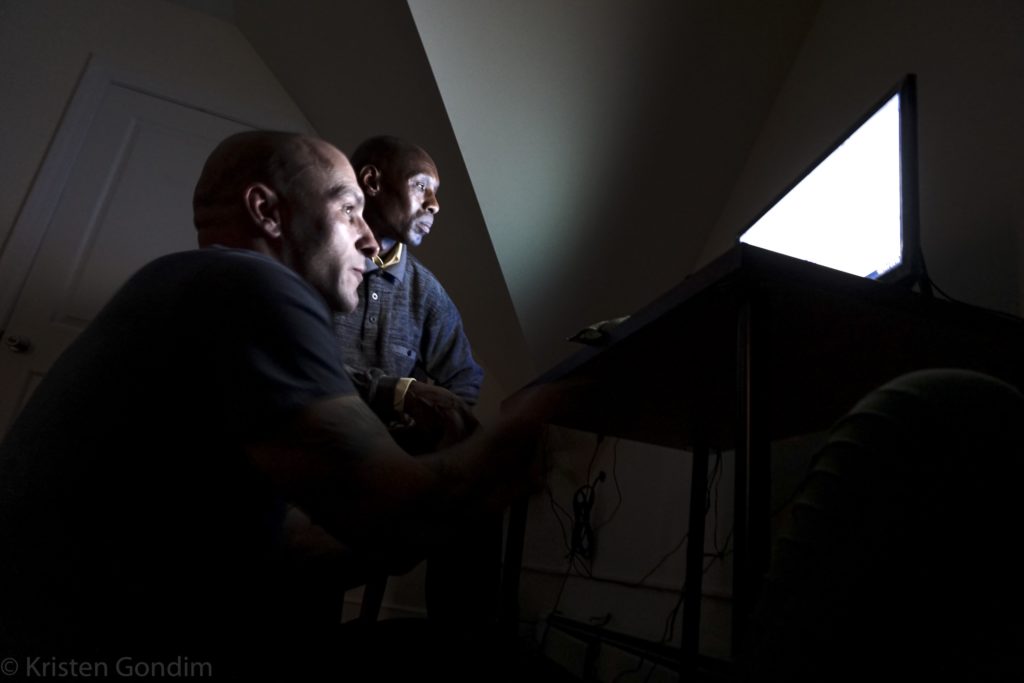 Fellow exoneree, Nat Cosenza, shows Clay how to set up and use the television that was donated to him. Photo by Kristen Gondim.

Although Clay may receive compensation from the state, it could take months or even years. And, since Clay’s conviction was vacated and he is not on parole, he isn’t eligible for state-run programs, such as access to a social worker, meant to help formerly incarcerated people re-enter into society.

Sharon Beckman, director of the Boston College Innocence Program, is not surprised by Clay’s current circumstance—as she’s seen it time and time again. She described to Burrell: “The innocent person released after years of wrongful incarceration … they’re on the courthouse steps with their lawyers looking very triumphant. That person gets nothing from the state, no transportation home, no home, no apology, nothing.”

“All this stuff I’m trying to learn now I should have learned a long time ago…I just feel sad about a lot of things I’ve missed out on.” – Frederick Clay

After spending the majority of his life behind prison walls, the job search for Clay has, understandably, been difficult. Burrell says, “Filling out job applications meant accounting for the 38-year gap in his employment history. And while Clay’s conviction was overturned by a judge, an employer checking for a criminal background would still see his arrest for murder.”

Eventually, Clay found employment at a metal shop in South Lowell. “I like to work. I’m dependable, and I just want a chance to prove that to people. And they gave me a chance to do that,” said Clay.

Although Clay is earning money, he can barely afford the cost of living and may need to find a second job, which has left Clay feeling frustrated and overwhelmed. Because these feelings are so common, Burrell says that Clay “often wakes at 2 or 3 a.m. and can’t fall back asleep, so he grabs an iron and presses his clothes.” 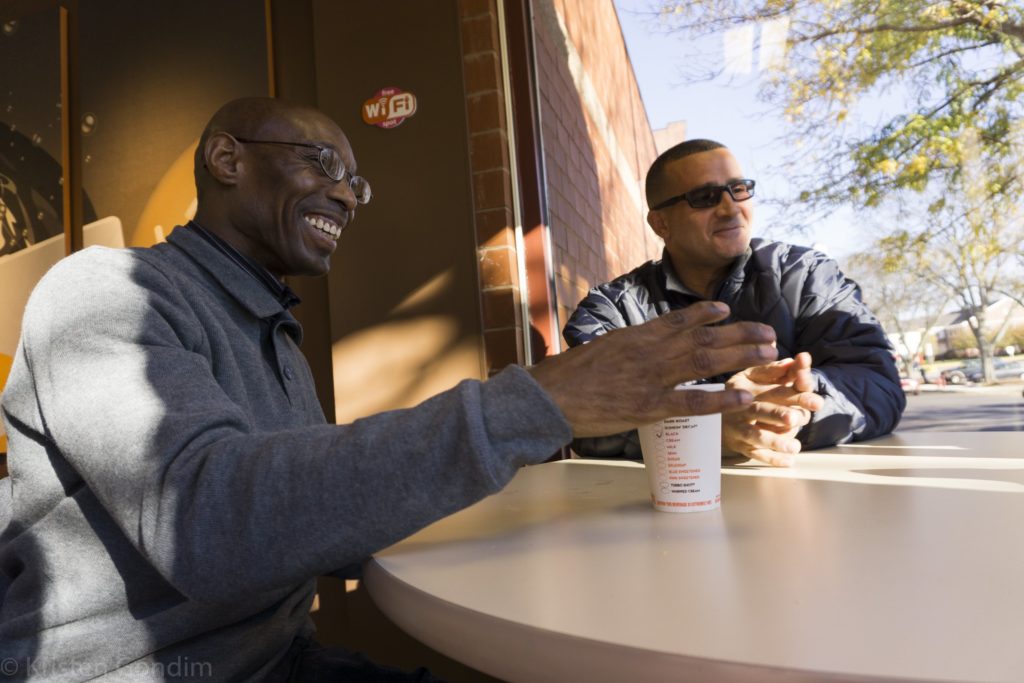 Clay shares a laugh with his friend and mentor, Louie Diaz. Photo by Kristen Gondim.

Slowly, though, Clay’s life is starting to fall into place. He has a job, a new apartment and a vast support system. But, as is the case for many exonerees, Clay is still haunted by past memories of prison, a fear of returning to prison and realizing that 70 percent of his life was lost to wrongful incarceration.

“All this stuff I’m trying to learn now I should have learned a long time ago. Or at least I should have some better knowledge of what I’m doing,” said Clay. “I just feel sad about a lot of things I’ve missed out on.”

Listen to a full-length podcast episode about Clay’s story here.