Anthony Graves and the Long Struggle to Freedom 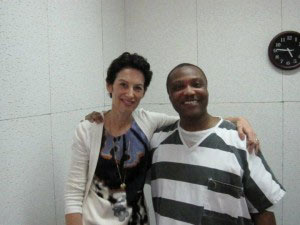 It was surreal to hear Anthony Graves’ voice on the other end of the phone line a few weeks ago. He was a finally a free man and I felt years of worry — that another injustice would be done, that he would never get out — melting away. It took 18 years, but an injustice had finally been overturned.

Anthony was 26 when he was arrested for the Somerville murder of Bobbie Davis, her daughter and four grandchildren. It was a gruesome murder in what could typically be described as a small, sleepy Texas town (population 1,704) settled between Houston and Austin.

The oldest child of his large family and a young father himself, Anthony would be found guilty of capital murder two years after his arrest and subsequently sent to death row for a crime that prosecutors as of now admit he did not commit. At the age of 45 and after serving 18 years in prison, Anthony is

the life that he never had a chance to finish building .

I first learned of Anthony and his struggle long before my time at the Innocence Project. I was working for the school newspaper during my freshman year of college in Houston and met a small group of staff members taking an advanced class titled Investigative Journalism: The Innocence Project. I signed up for it as soon as I could.Under the inspiring guidance of journalism Professor Nicole Casarez, the students were working as researchers and investigators with the Texas Innocence Network at the University of Houston Law Center (and later the Innocence Project of Texas based in Lubbock, both of which are members of the Innocence Network). Professor Casarez, an attorney herself, taught us the ins and outs of what causes wrongful convictions and even joined Anthony’s legal team at his request.

Under the inspiring guidance of journalism Professor Nicole Casarez, the students were working as researchers and investigators with the

at the University of Houston Law Center (and later the

based in Lubbock, both of which are members of the

). Professor Casarez, an attorney herself, taught us the ins and outs of what causes wrongful convictions and even joined Anthony’s legal team at his request.

As journalism students, we obviously weren’t very well versed in criminal law or the legal system for that matter. Professor Casarez expertly taught us the-hypothetically fatal-flaws of the criminal justice system. We read ”

” from cover to cover while learning just how important it was to be thorough and exhaustive in our research into cases that were often prosecuted without ever being thoroughly scrutinized by the prosecution or the defense. Collectively, we went through a number of cases, but the one that shook us all to our cores was Anthony’s.

I officially worked on Anthony’s case for three years, from 2003 till my graduation in 2006. There were

a number of students who worked on the Graves team

, spanning a number of years-all of us helping with the case past the class, even past our graduations, when we could. It wasn’t until 2005 that I had the opportunity to visit the

with Professor Casarez. I remember walking through prison security and being seated, waiting for Anthony to be escorted into the small visiting booth. Anthony was soon brought in wearing his electric smile and brimming with hope at the sight of friendly faces.

Our brief conversation not only sealed my friendship with the man I had gotten to know second hand through transcripts, reports and interviews, but it confirmed for me what everyone who worked on the case already suspected: he was innocent. Meeting him reminded me that Anthony never compromised his integrity; he never admitted guilt for the sake of a lesser sentence. His family, especially his

, never doubted him and was steadfast in their belief that he wasn’t capable of the crimes for which he was convicted. The facts conveyed a similar conclusion.

Plenty of journalists and broadcasters have reported on Anthony’s case, but to make a very long and complicated story somewhat short: Anthony was charged as a result of testimony by one Robert Earl Carter, father to one of the murdered children and the state’s main suspect. Carter was pressured by investigating officers to name other suspects, since the officers’ theory was that no one person could kill two adults and four children on his or her own. Carter gave officers two unverifiable names and the names of two people that prosecutors would pursue: Carter’s wife and her cousin, Anthony. Prosecutors, namely District Attorney Charles Sebesta, agreed to drop the indictment against Carter’s wife if Carter would testify against Anthony. Carter did.

Sebesta, however, introduced Carter’s testimony at trial without ever disclosing to Anthony’s attorneys that Carter recanted his original claim about Anthony’s involvement. If Carter was consistent in anything in his last years before his execution in 2000, it was his retraction that Anthony was not involved in the murders. So consistent, in fact, that in his dying declaration before his execution he confessed one last time: “It was me and me alone. Anthony Graves had nothing to do with it. I lied on him in court.”

It wasn’t until 2006 (six years after Carter’s execution and fourteen since Carter first admitted he lied) that the Fifth Circuit Court of Appeals overturned Anthony’s original conviction and demanded he be taken off death row. The state, however, decided to retry Anthony and shunted him to a Burleson County jail. Judge Reva Towslee-Corbett, daughter of the same Judge H.R. Towslee who presided over Anthony’s original trial, set bail at $1,000,000. The state brought in a number of special prosecutors to retry Anthony, including Patrick Batchelor-the former Navarro County District Attorney who secured Cameron Todd Willingham’s death sentence and, in the course of his work on Anthony’s case, attempted to convince Anthony and his attorneys to take a plea in return for a life sentence.

(Note: There’s a slew of jaw-dropping facts outlining the miscarriage of justice that was Anthony’s case, all of which are better explored in other write-ups: from Sebesta intimidating Anthony’s then-girlfriend by announcing minutes before she took the stand that she would be investigated as a co-defendant if she testified as an alibi witness; to a now-retired medical examiner who testified that he “scientifically” matched a knife that Anthony owned to the one used at the crime by placing a duplicate of the knife in one of the victim’s skull caps while on the stand, damaging the evidence; to an alibi witness who refused to testify on Anthony’s behalf since it would mean having to admit that she as a Caucasian was dating his brother, a much younger black man.

for what I believe has been the most comprehensive account of the case.)

As Anthony’s attorneys continue to point out to this day, there was

connecting Anthony to the murders. The many prosecutors who looked at Anthony’s case were dealing with the same information that both convicted him and, ironically, convinced District Attorney Bill Parham and special prosecutor Kelly Siegler that Anthony is “an innocent man.” Such an uncompromising statement of Anthony’s innocence is a pronouncement by prosecutors that rarely (if ever) happens in non-DNA cases.

While the facts of the case convinced Parham and Siegler of Anthony’s innocence, it didn’t stop earlier special prosecutors from attempting to pursue a case based on bad science. The Austin Chronicle reported in 2009 that “prosecutors…brought in Fort Bend County Deputy Keith Pikett

to conduct a ‘scent lineup'”

and allegedly testify to Graves’ guilt based on his basset hound’s ability to pick up smells more than a decade after the crime was committed. Thankfully, the state decided to drop that angle. (The Texas Court of Criminal Appeals actually concluded in late 2010 that

to secure a conviction in the state on the heels of

by the Innocence Project of Texas debunking the unvalidated procedure.)

Despite his release, Anthony still has a lot to contend with. Men and women who are able to prove their innocence

, and they have to make up for years of lost personal and professional experiences. In Anthony’s case, however, he has an enormous support system with an overwhelming number of family and friends standing behind him.

I spoke with him briefly the day of his press conference in Houston, following his release on October 27. It was four years since I first heard his voice. We spoke by phone, not terribly unlike the first time except the obvious major difference being we weren’t in a rusty, paint-chipped booth anymore. He was free, and I did what everybody tends to ask men and women who survive what Anthony survived: I asked him how he felt.

“I don’t know,” he responded, the most honest answer I could have expected.

and Parham as of mid November in pursuit of compensation for him under the Tim Cole Act. While Texas is home to the largest number of exonerations in the country, it also

. If approved, Anthony is eligible for $80,000 for each year he was wrongfully incarcerated and college tuition. He plans to use the latter to take communication classes in order to help other wrongfully convicted men and women, classes not unlike the one that introduced a group of wide-eyed journalism students to his case.

Relieved as I may be, the lessons we learned were nonetheless stark and jarring. The students I worked with-my friends-we can laugh about it now, but two of us received threats of litigation, others were chased and threatened with a gun and most of us experienced firsthand the grim racial reality that exists in small towns like the ones we visited in the course of our work.

We were laypeople, for all intents and purposes-young journalism students digging extensively into a case that the state of Texas didn’t deem worthy of revisiting at the time. Those locals and witnesses who agreed to talk with us usually understood that we were working to prove what so many of them already believed: that Anthony was innocent and that the state made a harrowing mistake. It’s nothing short of humbling to realize that some of the work we did helped prevent it from becoming a deadly mistake.

Above, Nicole Casarez and Anthony Graves moments before his release. (Photo courtesy of Nicole Casarez.) Below, watch raw footage of Anthony’s release from prison.