After 21 Years of Wrongful Incarceration, There Was Only One Person He Wanted to Call

Angel and Lilliana. [Courtesy of Lilliana]

A few years before Angel Echavarria was wrongfully convicted of murder in 1996, he met his first love, Lilliana. Although they weren’t together during his wrongful incarceration, Lilliana was the first person Angel wanted to talk to when he was exonerated in 2015 with the help of the Committee for Public Counsel Services Innocence Program in Massachusetts. It didn’t take long for them to rekindle their love, and they were married soon after. Here’s what Lilliana had to say about their love.

Angel and I met for the first time at my uncle’s house in 1986 or 1987, just after he’d arrived in New York from the Dominican Republic. The next day, I asked my aunt about Angel; my aunt said he’d asked about me, too. From there, we started talking.

We only dated for about a year before I went back to the Dominican Republic. Angel told me not to go, but I went anyway. When I returned to the States, he was already involved with the mother of his kids. So, I went my way, and he went his. Not long after, Angel was wrongfully convicted and incarcerated for 21 years.

In 2015, I remember my mom calling to tell me that she’d seen Angel on the news — he had been released from prison. I was so happy, I cried! But, I said to myself, “Let him come out and do his thing. Let him do whatever he needs to do.” So, I didn’t reach out. Angel had other plans though.

Angel tried contacting me as soon as he got out of prison. First, he called my cousin. “Where’s my girlfriend?!” he asked, and my cousin gave him my number. Angel then called my mom to ask if I was married before he finally called me, and we started talking again. What we both remembered most about our relationship is that we used to sleep cuddled up next to each other.

Angel had other plans though.

Soon after we started talking, I asked Angel if he wanted to move to Florida. At the time, he was at a halfway house in Massachusetts, and I was living in Florida. He then asked me to marry him, but said he couldn’t move to Florida yet. I told him, “If you’re going to start with that, we’re never going to be together. You just have to come.”

On Christmas Day in 2015, I flew out to Massachusetts and picked him up. We rented a car and drove back to Florida together with all of his things. I was so nervous, because I hadn’t seen him in years. I was crying so much that my makeup was running and my contact lenses came out. It all worked out though, and we were married in June 2016. 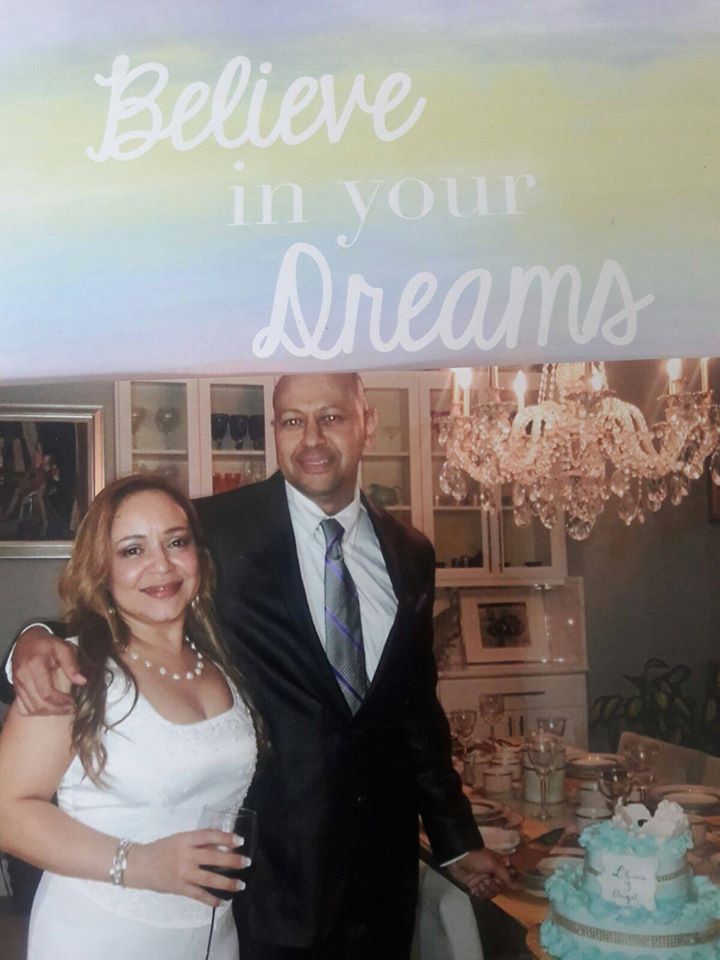 Angel and Lilliana on their wedding day. [Courtesy of Lilliana]

It took Angel a while to adjust to life outside of prison. In the beginning, he napped for days at a time. I also had to teach him everything all over again, like driving, opening a credit card and using a cell phone. There is so much new technology these days. Even when I had to put gas in the car, I’d make Angel do it so he could learn. Little by little, he relearned everything.

It didn’t take Angel long to want to start partying again. We love going dancing together, so we go out dancing every Friday night. We are already looking forward to this Valentine’s Day because it falls on a Friday, so we can go out to dinner and go dancing afterward.

It took Angel a while to adjust to life outside of prison.

I just love seeing Angel happy. And, I want him to feel free. I don’t want him to think that he got married and is stuck, so I let him be. I’m not jealous; I trust him. I want him to enjoy life, since he lost so much of his.

Related: How This Exoneree Found Love With His Elementary School Crush Decades Later

Angel has always been a loving person, a sweetheart, so humble and close to God. Everyone who meets him loves him. He came out of prison with no hate. I used to tell my son that I wanted to become a lawyer to get Angel out of prison. My son would ask me, “How do you know he’s innocent?”

“When you meet him, you’ll know,” I would tell him.

Sure enough, when my son met him, he said, “Oh mom, now I know what you mean.”

I always remember what I told my mom after I first met him. “Mom,” I said, “Angel is a special guy who belongs in my heart.”

Editor’s Note: Interview has been lightly edited for clarity.